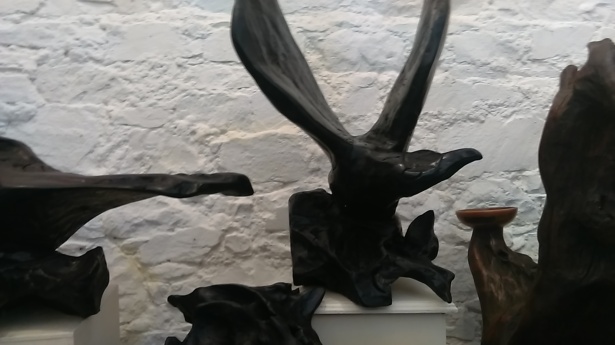 Two years ago, we all called to Nenagh’s Abbey Court Hotel one Sunday afternoon, where Andy Whelan was holding a week-long exhibition of his work.  I had heard about his bog-wood sculptures,  so was looking forward to seeing the pieces and meeting the artist and photographer. 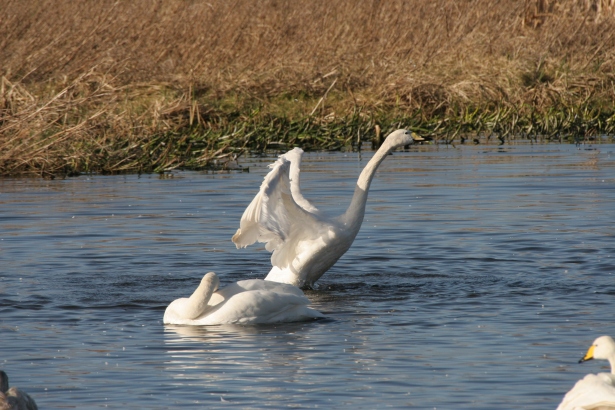 When you meet Andy, the first thing that comes across is his genuineness; the second his awe at nature – the birds, trees or stones from which his creations derive; the third is his mystical /spiritual side.

Andy lives at Moanfin, Nenagh, with his wife Rita and that is where I travel this week, to see his home based workshops and gallery.

As a young man, he started out working in a factory there – Flemings – before moving into retail. He got an opportunity to work  in drapery and shoewear in Bryan’s of Athy, which he took up,  and moved from there to another store in Longford, then on to Galway before he settled in Nenagh in 1979 to work in Galvins. In all, he was 14 years in the retail business.

Then an opportunity arose for him and his wife to take on the role as Steward and Stewardess of Nenagh Golf Club and this is where he worked for 25 years, care-taking the grounds; managing the bar; answering the phone, among many other jobs.

The artist inside was always there waiting to find expression, waiting for the opportunity to emerge. So, when he finished at the Golf Club, Andy started to do woodcarving classes with a friend, Paddy Spain, who was also a gardener.

The classes were in Ardcroney and their coach was an incredibly gifted man from Zimbabwe called Paradzai Havatitye.  Paradzai had grown up carving wood sitting around an open fire in his native home and he was able to show his students how to do things with a slightly African twist, which Andy has subsequently developed uniquely into some of his wood work.

I ask Andy where he sources the woods he works with and this leads to several interesting stories which I touch on in different sections below.

His bog-wood comes from Templetouthy, scraps that he then works with – sanding and polishing into pieces of sculpture. The bogs of Ireland are an economic resource – but they are also a unique part of the heritage and culture of Ireland. They are also an inspiration and a raw material for artists! Bog-woods preserve many layers of history. Radiocarbon dating has confirmed that bog-wood has been buried and preserved in bog-lands for over 5,000 years – yes, five thousand years. The pine-wood takes on a golden hue, the yew becomes a rich auburn and the oak become black.

Andy has three work spaces. The first is where he sands the pieces down (this is the shed where he shows the boys how to do some sanding – in the picture discussing the elm trees below). The second is where he polishes the pieces and then finally the gallery is where the finished pieces are stored and displayed.

He uses Briwax, which comes in different colours, to give a sheen to the almost finished pieces.

Andy shows us inside his ‘polishing studio’ so we see how the sanded pieces are finished. 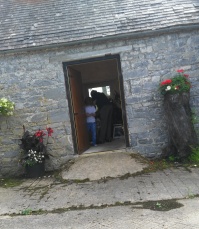 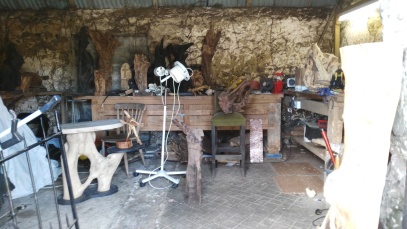 I can’t help falling in love with some of the piece here – that he says are  inspired by the ‘tree spirits’. This intrigues me and reminds me of old folklore where the trees, and other parts of our natural world around us, are alive, talking to each other in whispers that mere humans like us are not evolved enough to fully comprehend.

The final pieces are then displayed in his gallery – which is situated to the left of the polishing shed. 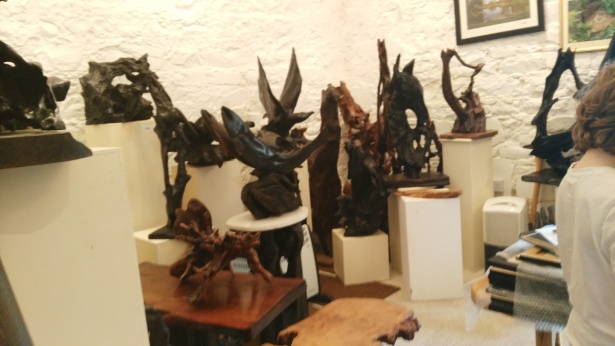 In the sanding shed at the back of the house Andy shows me some pieces that came from a giant beech tree from Ashley Park in Nenagh. The tree was never expected to fall but, one night, a ferocious storm came and the tree, that seemed so omnipotent was unable to withstand the force and power of the storm winds.

While this was the end of one beautiful life, sitting in the garden of  Ashley Park, it was the start of another story for the tree. Pieces were dispersed and some arrived at Andy’s work-space to be turned into pieces of sculpture.

He also shows us the roots from a Spanish Chestnut from the same estate that his eye saw a story in and that sits in another corner of the room, partly but not yet fully ready for polishing.

On this trip for my blog, I had, at one stage, all three of my ‘helpers’ with me and they were only delighted to be shown how to sand a large piece of elm that Andy is currently working on.

Trees will be the theme of his next exhibition and I can see this piece coming alive in front of my eyes.

Already he has spent 47 hours sanding this elm lovingly – which came from the Nenagh Co-Op grounds.

The elms were planted there in  1987 at a special event launched by the then European Commissioner for Agriculture  Michael O’Kennedy (who I interviewed at Government Offices some years ago, when I was doing a piece on Tipperary entrepreneurs for the Irish Entrepreneur Magazine).

These beautiful trees became the victims of Dutch Elm Disease. They now have only a 30-year life-span before this disease will destroy them.  But, as you can see from the image below, for Andy, they have the right to a second life – and this beautiful piece will one day stand in someone’s home hall entrance or some hotel lobby. 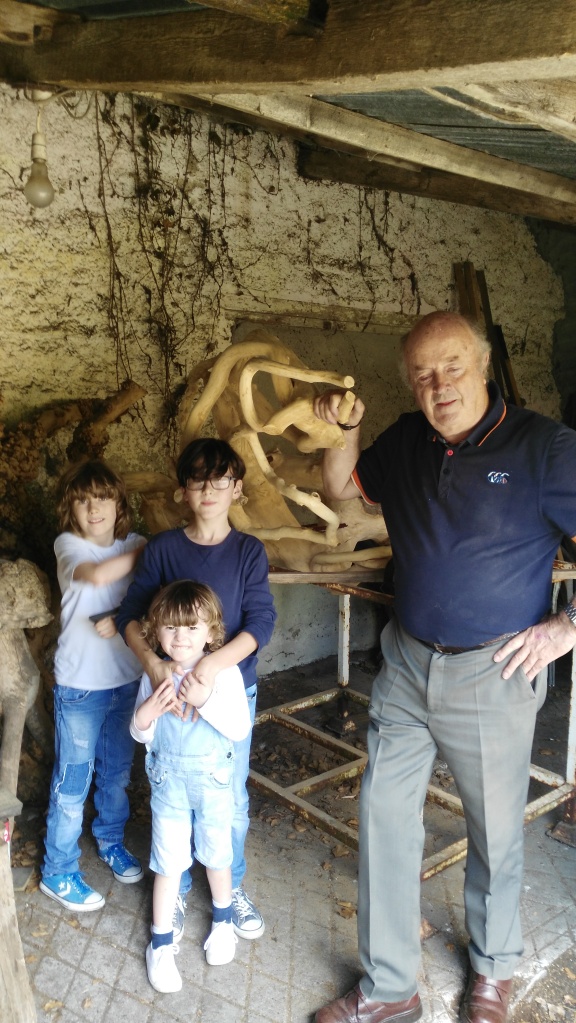 Andy shows me some of the stones he also collects and he works these into various sculpture pieces.  In the image below, he is showing me beautiful cut stones from the Lisheen Mines. I wish I had a better close-up, but they are really exceptional with loads of different shimmering colours catching the light.

My New Bread Board!

I note a piece of wood on the floor and say: “That would make a great chunky rustic breadboard”. “It’s yours then,” he tells me. 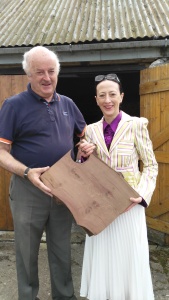 I am taken aback at this kind gesture and I ask if he would go and get a pen to sign the side of it, so I can tell guests who carved and sanded it  – and point out its ancient history.

Andy has a mystical side. This is what, in many ways, bring his pieces to life.

I couldn’t help imagining, after my afternoon with him and the boys, if, when we closed the door to the workshop where he polishes, and the gallery, where the finished pieces are elegantly displayed, if all the various pieces started chatting to each other about the discussion they had just overheard.

They might ask each other :  ‘Who was their creator talking with? ‘ ‘A blogger called Denise and three very lively boys?’. ‘ Why  were they asking so many questions about us?’.

I have to admit I am fascinated by what people like Andy Whelan are doing. 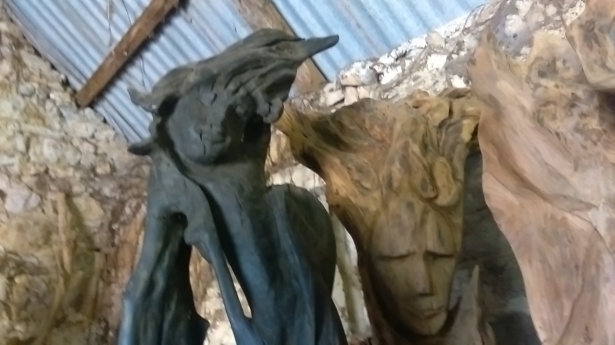 And I have a very vivid imagination! It would take Tim Burton to do something with that imaginary conversation.  If Mr. Burton spent an afternoon among these hand-crafted pieces of wood, I think he would see a narrative emerge between the various sculptures – a story about their ‘chat’ , reaching back 5000 years into history. It would surely make for an interesting movie plot!  Some of them are like animals from the Irish landscape; some have faces – tree spirits that exude a personality all of their own; all of them look wiser than this spectator who admires and seeks to interpret them.

Hidden away almost, in corners of Tipperary, in work-spaces like these (in this case, sheds which were once used as horse stables, close to the town of Nenagh), amazing things happen and great work gets done – quietly and unassumingly.

Andy is not on Facebook. I can see why.