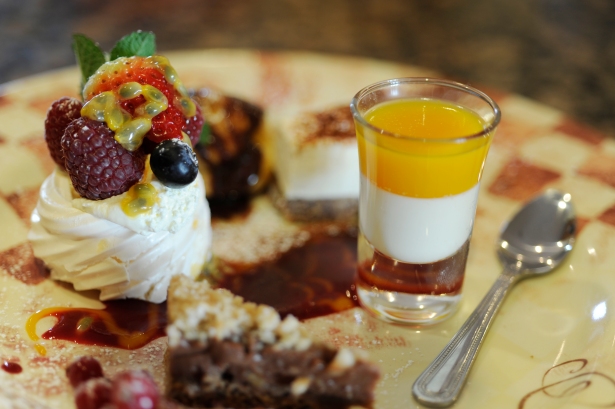 It is a sunny Sunday morning early in December and Don and I are heading over to Fiacri Country House Restaurant and Cookery School to interview Ailish Hennessy, the chef and owner, together with her husband Enda, of this renowned local enterprise.

There is a feel of Christmas in the air, and driving these local roads, like driving up to Killea every day, reminds me of time spent with my brother Tim. I recall one particular Christmas Eve he and I went to Knock and the surrounding area, near where Fiacri House is situated, as Tim wanted to meet some farmers, with whom he worked in the cattle dealing business, to give each a bottle of brandy for Christmas. Suffice to say it was a bit of an adventure and I recall we got home very late, having missed Christmas Eve mass.  Mother was not a bit happy with us!.

Since October I have made the trip to Fiacri House on several occasions as I did the cookery course that Ailish holds on Tuesday evenings, for four weeks, in October and more recently her Christmas evening class. There are classes at Fiacri House all the year round, and participants can enjoy sampling the dishes prepared in the class, in their beautiful dining room, afterwards. It was a really most enjoyable experience and I learnt some lovely new recipes.

Don and I arrive and even though it is only 10.50 am on a Sunday morning, the place is buzzing. Fires are lighting and Grace, their youngest child, is hoovering the carpet in the lobby. Things are almost ready for the arrival of a huge party of people at noon for the day Christmas cookery demonstration.

Ailish is sitting having a cup of tea at her kitchen counter, where the demonstrations take place, and she invites Don and I to join her and commence our chat.

Ailish Hennessy was born Ailish Maher, the daughter of Betty and the late Tommy Maher in Templetuohy. I asked her if she grew up in a ‘foodie household’ and she tells me her Mother was a good cook and so was her maternal grandmother Sadie Clarke (who died, aged 96, only a few weeks ago). Ailish tells me her grandmother reared fourteen children and ‘could make a meal out of nothing’. Another family member who was a big influence was her grandaunt Jo who ran a guest house in Dublin – Kilronan B & B on Adelaide Road.

Ailish frequently spent her summers at her grandaunt’s guest house where she helped out. She loved cooking from an early age. Her grandaunt ran a top class operation and had very high standards, Ailish tells me, something that clearly left a lasting impression. However neither her Mother nor her grandaunt wanted Ailish to pursue a career as a chef, which was her dream. They wanted her to become a teacher or a nurse. Being a chef was no life for a woman, it was believed. After completing her Leaving Certificate at Our Lady’s Secondary School in Templemore (where she studied Home Economics under the late Sr. Gabrielle) there was a little compromise made – and Ailish went to Bolton Street to do a course in Hotel Management.

Ailish soon discovered Hotel Management was not the course for her. Still wanting to pursue her dream of becoming a chef, she started taking private classes under Alix Gardner, who ran a private ‘Cordon Bleu’ Cookery School in Dublin. Ms. Gardner was quick to spot Ailish’s unique talent.

Ailish won a scholarship to continue her studies with Ms. Gardner and her teacher informed Ailish’s mother that her daughter was going to go places, and not to stand in her way anymore. Finally, it had to be accepted that Ailish Maher would pursue the career she had wanted from an early age – to become a chef.

On completion of her scholarship Ms. Gardner had three top class jobs lined up for Ailish but advised her to take the job at Rathsallagh House in Co. Wicklow. While the salary was a little less , this would be a really worthwhile experience where Ailish would flourish. And she did. She stayed there for three years and Kaye  O’Flynn  was another big influence on her emerging career.

Cookery Classes Back in Tipperary

On her days off Ailish would come home to Templetuohy where she started to give cookery classes at her Mother’s kitchen table. They grew in popularity and she soon had as many as thirty people coming to participate. Not surprisingly her reputation as a gifted young chef was rising and she was head hunted by the Egans of Inch House who were opening up a restaurant in the Ragg Thurles. Ailish started the restaurant there but it was not long before she was again head hunted, this time by Frank Mulcahy of the Anner Hotel in Thurles. They were expanding and growing the hotel business and offered Ailish a lucrative contract to come on board.

This, however, was not the kind of kitchen Ailish was used to running – the numbers she was catering for were huge, and she had to divide her time between large wedding and other parties  and running the restaurant – a juggling act that was very difficult though she learnt a great deal  about managing larger groups here. She met her future husband Enda Hennessy, the son of John and Mary Hennessy, around this time and they were planning to start a small cookery school at their new home, in Boolareagh Knock where Enda was farming the family farm.  The plan was, after their honeymoon, that Ailish would continue to work in the Anner Hotel and run the cookery school on days off. They built their family kitchen with this in mind, ensuring it reached the Health and Safety standards needed.

Once again Ailish was approached, this time with the offer to set up her own restaurant at the Waterfront Roscrea. A beautiful building, she explains to me, but the rent was very high for the location and it was hard to make the venture profitable as most of the customers wanted a seat at lunch time only. There could be large parts of the day when business would be very quiet. Ailish, however, worked almost a 7 day week here and was at this time, pregnant with their first child Tommy. A month before Tommy was born she became ill with toxemia and was hospitalized and she and Enda decided, reluctantly at this point, to close the business in Roscrea.

Amazingly she was no sooner home from hospital with their new baby when their phone started to ring and people wanted to know could they book a table to come eat. The plan was a cookery school, not a restaurant. So they were effectively looking to book a seat in their home!  This had not been the plan but when Ailish received a call from their local Parish Priest asking if he could book a table for lunch, for Bishop Willie Walsh and ten other priests, the day of the local Confirmation  – the realization dawned that they were most likely about to start a restaurant, right  there under their feet, at their family home.

Ailish says they had no place to put the priests and the Bishop unless they seated them at the family kitchen table! So very quickly and demonstrating the type of work ethic and resilience both Ailish and Enda have in abundance, they converted the garage situated and attached to the house into a dining space, by laying down a timber floor, polishing an old fire place that was in storage at her parent’s house in Templetuohy and installing it, and hanging some good curtains they had used at the Waterfront. Within a few weeks they had a space capable of seating their first large party at the house.

So successful was the fledgling business that just after one year their accountant advised them they should apply for a loan to expand. So they did,  building the first of two extensions to the property in 2000. Not even skeptical bankers could deter them!. It was clear the business was there and growing from word of mouth. Ailish and Enda felt sure they would make it a success story – and they did.

There are two possible meanings to the old Irish word ‘Fiacri’ and Ailish tells me it was Molly Maher from the Stables – a thatched cottage down the road, who lived to be 100 years old,  who told Enda and Ailish about the name and connection to the field where they had built their new home. One meaning is ‘Hunting King’ but the more likely meaning, in this context, is ‘wet marshy field’.

Ailish says when they were building on the site they came across stones that would indicate drainage from older years, confirming the likely reason why the place was named ‘Fiacri’. And so the house, and soon to become well known gourmet restaurant, was born, something we have to be so proud of here in Tipperary.

In 2004 they were the winner of the Georgina Campbell Feile Bia Award and they are also listed among the top 50 restaurants in Ireland by Hot Press. 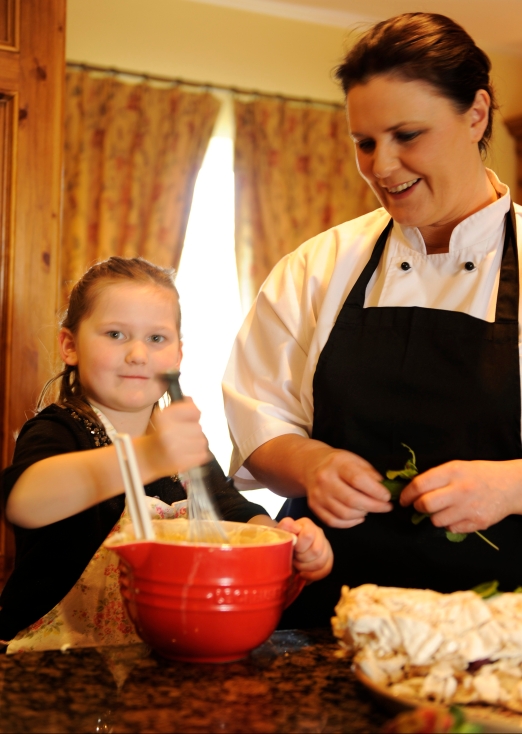 I look at my watch and it was now just after 11.30 and people were already arriving for the cookery demonstration at noon.  I commend Ailish for her remarkable energy and work ethic. ‘It cannot be easy’ I comment, ‘running a business like this from home’. Ailish is frank about the fact that it is a very demanding life. She was working the previous night until after 2 am as they had over eighty people for dinner. She was up at 7.30 am that morning and she was about to start a food demonstration at noon. The mind boggles – to have the energy to run this business, at this level, the past twenty years, and rear four children – Tommy, who has just joined the Military; Denis who is in 5th year (and now helps manage the bar at the weekends,if possible with school work commitments ); David who is in 3rd year, and their youngest Grace, pictured above with her Mam when she was a little younger. This is surely a family enterprise story of passion, dedication – but above all else, of hard work and talent.

‘Are any of the children interested in getting involved in the business?’ I ask? ‘Grace is’, Ailish says, ‘but I don’t encourage her. She could have an easier life!’. I am surprised to hear this after the effort it took for Ailish herself to convince people to allow her to pursue her chosen career  path. Somehow I get the impression Grace will make her own mind up on the subject, when the time comes.

Fiacri House is just ten minutes drive from Greenville Cottage and I encourage all our guests to go and enjoy this unique evening out in their restaurant, serving locally sourced and produced food, to the highest standards. 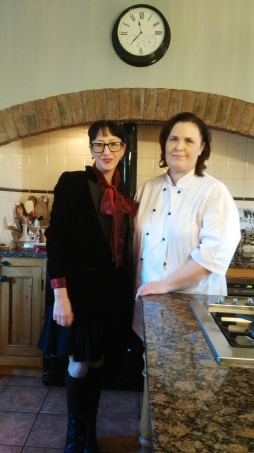 I return home after getting a photograph with Ailish, taken by Don, driving back along those rural and beautiful winding Irish roads, the sun sparking in the December mid day sky. My mind is busy thinking about the fascinating story I have heard. I have people coming later for late lunch and I am going to make Ailish’s delicious savory goats’ cheese tart, followed by one of her delicious desert recipes, like the one of her amazing deserts, photographed in this blog.

I am looking forward to the Spring classes already. While a big part of me wants to return to education soon and take the MA in Art History, Collections and Curating at UCD, there is another big part of me that would love to do a professional cookery course at the Dublin Cookery School. Maybe in time I will do both!